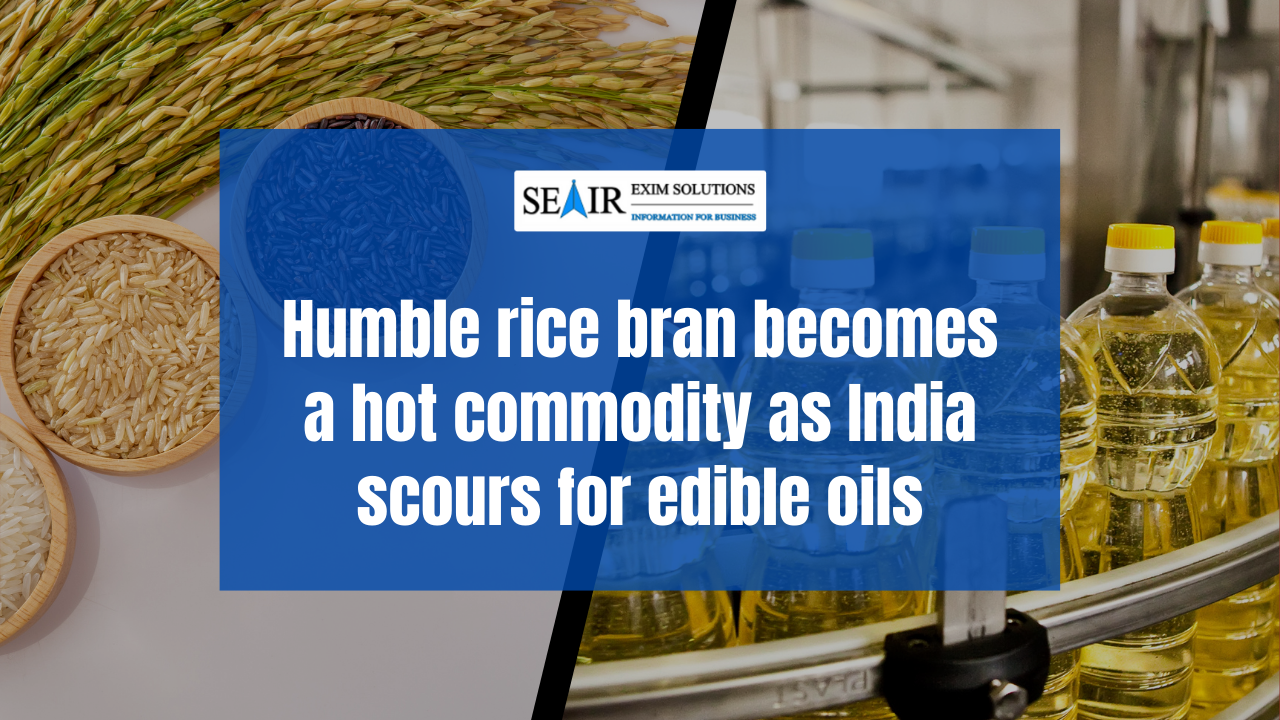 Rice bran has become a highly sought-after product in India, which is the world's largest importer of vegetable oils and is attempting to overcome an edible oil deficit caused by global supply disruptions.

Rice bran, a byproduct of rice milling, has traditionally been used for cattle and poultry feed. Oil mills have recently begun producing rice oil, which is popular among health-conscious customers but has previously been more expensive than competing oils.

Rice bran oil import data represents a minor fraction of total vegetable oil consumption in India, but it is one of the fastest-growing edible oils, according to industry authorities, and output and imports are expected to expand to meet demand.

The current surge in global edible oil prices, fueled by Indonesian limitations on palm oil exports and problems in Ukrainian sunflower oil supplies, has wiped away rice bran oil's usual premium over competing oils. This has resulted in an increase in demand for bran oil, which has comparable flavour qualities to sunflower oil.

"I was seeking better meal alternatives because of COVID-19." "I initially used rice bran oil for health advantages six months ago and have been using it ever since," said Aditi Sharma, a Mumbai-based housewife who converted from sunflower oil to rice bran oil.

"It tastes nice and is beneficial for your health," Sharma added, alluding to the oil's anti-oxidative and cholesterol-lowering effects.

According to statistics gathered by the Solvent Extractors' Association of India, rice bran oil typically demands a 25% premium over other oils, but in recent months has been cheaper than imported vegetable oils, making it more affordable for the people (SEA).

Sharma stated that even if premiums were reinstated, she would continue to purchase rice bran oil for her family of four.

FROM BY-PRODUCT TO MAIN PRODUCT

The high demand for rice bran oil has changed the economics for rice millers, who are now prioritizing bran oil output.

"Instead of being a by-product for rice mills, rice bran has now become a core product," said Puneet Goyal, chief executive officer of Ricela Group, the country's largest producer of rice bran oil.

to keep up with surging demand. Rice is to expand oil refining capacity to 750 tonnes per day from 600 tonnes in the next two months, according to Goyal.

With vegetable oil in limited supply, oil mills are willing to pay record-high rates for bran, according to B.V. Krishna Rao, head of the All India Rice Exporters Association.

Rice bran prices have risen to 30,000 to 36,000 rupees per tonne, compared to paddy prices of roughly 19,000 rupees, which are processed for rice extraction.

However, a lack of oil processors in all rice milling sites remains a major constraint on bran oil supply, as rice bran must be processed into oil within 48 hours after being separated from the chaff in order to be suitable for human consumption.

Only 55% of bran is now processed, with the remainder going to the lower-cost feed market.

Nonetheless, with various oil processors increasing output, the nation is on track to produce 1.05 million tonnes of bran oil this year, up from roughly 950,000 tonnes in 2021, which could help India cut imports of competing oils.

Over the last two decades, edible oil consumption in India has tripled as the population has grown, earnings have improved, and people have begun to eat out more.

To accommodate expanding urban demand, companies such as Adani Wilmar, Emami, and Cargill's Indian subsidiary have established their own rice bran oil brands.

According to Goyal of Ricela, institutional purchasers such as PepsiCo and Haldirams are boosting their usage of bran oil for frying.

However, local resources are insufficient to meet expanding demand.

"A few firms import rice bran oil from Bangladesh, but even Bangladesh has a limited excess for exports," IARBO's Mehta explained.