Afghanistan Global Trade Affected After the unfortunate Takeover by Taliban 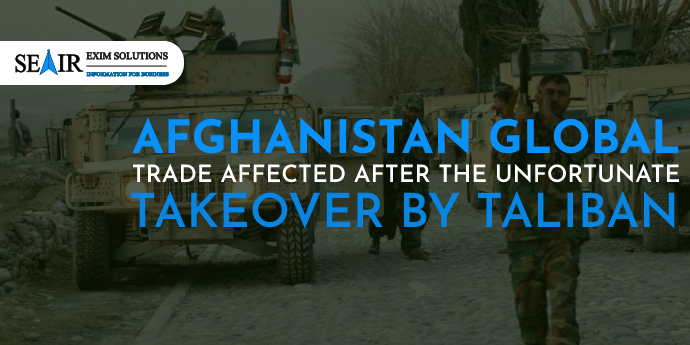 Trading is one of the most beneficial businesses around the world. By importing and exporting, the products with the help of the trading data may choose your business in the right way. We are trading over the globe with various kinds of products. Unfortunately, Afghanistan trades are affected in recent days because the Taliban take over the country. The country is at risk factor by the control of the Taliban terrorist. The impacts of the country will disturb the whole world in a high manner.

They will not define their economic value in such time, and there is a risk for dealing. Thus, Afghanistan is dealing with both exporting and importing over the globe, but it is fully affected by the nation because of the Taliban. Moreover, the citizens in the country have sacred about their rules and regulations; in such a way, they lose their happy lives. Of course, some more countries help the country to rescue the people.

Effects of trade under the control of Taliban:

Now the importing and exporting business is widely affected by the Taliban terrorist. All the powers are coming under the Taliban, and now, they rapidly expand the new types of terms and conditions. Of course, all domains are disturbed, and Afghan residences are peacefully losing their daily lives. In such cases, global trades are affected, and the country's importing and exporting business is at a low level. Thus, Afghanistan trades data are not updated, and now the trading businesses are declines.

However, many countries depend on their importing products like dry fruits and spices. Before the control of the Taliban, we will trade over several million dollars, and now it remains to be lost. Now there derived by the new term and condition so that they may apply the additional amount for the import and export of the stocks. By the Taliban occurrence in the Afghan, the global trade is affected heavily. Thus, the Taliban take control, so trading data are being collapsed in their term, so many partners canceled their tie-ups.

Impact of the Taliban encircling:

Thus, Afghan does not provide any good things to Trading internationally. Now, pick the various sorts of the country for export and import, those trade-ins the Afghan country, needs to choose the other substitutes to full fill the needs from the nation. In several ways, many countries lose their partnership with the country, and they are changeover to the various type of traders those already exporting from the country. Generally, international Trading is getting various sorts of disturbances by the Taliban terrorist. Form the country, many more nations tend several products and now they will not tie-up with the country. In addition, the ruling of the Taliban loses the economical status. Before the issues, they will grade easily with the several countries also gaining more benefits.

What items are trading in the Afghan?

As per the Afghanistan export data, they are trading several goods over the various sorts of the country. Their goods are dried fruit, cotton, cereals, carpets, and so on. The before mentioned goods are export from the country. However, Petroleum, wheat, peat, garments are import from the country. Both the types of Trading are affected now by the collapse of the Taliban. They are ruling the country in their way, so much more people are affected by the nation. In addition, they will export the goods at the lowest cost price. Before the undertaken, the Afghanistan trade successfully internationally, while Taliban enter in the country, stops all trade routes, and by these, many nations gets more loss over internationally.

Who are the trade with Afghan before the control of the Taliban?

They are one of the topmost trading partners, and many countries are tie-up with them for Trading like India, Pakistan, Russia, Turkey, Iraq, Iran, etc. When the Afghan rule is under by the Taliban, the merger country is lost in the trading domain. Mostly the Taliban are sealing the all-trading platform in their country, and there is no way to deal with the nation. By them, both the importing and exporting business has been losing globally. Thus, exporting products from the Afghanis now export from the various nations. Terrorist heavily affects mostly all countries.

How are Afghan people suffering from unsatisfactory global trade?

Of course, the Taliban stop all portals that arise for Trading. Now, there will be demand for every product in the country because there will not arise importing platform. By these, Afghan people are suffering in many ways, manufacturing all the goods in their country. In this nation, lives are the risk factor, although they are taken over their things by their challenging. As per the terms and conditions, they need to survive in the nation. In such a way, they need to gather all their goods in their country only.

By the bad Trading, they will lose in different ways and getting more risk challenging factor by the Taliban. Before the inclusion of the Taliban, they will go by their normal way after the control of them, they facing many more troubles in their lives. Generally, Trading also is losing, and the Afghan people are not living their normal lives.

How global grade is affects by the Afghan country?

In many more ways, international trade is affected, and it is one of the great impacts for all countries. Thus, Afghan people are now risking life, and now they will not tolerate their life with the Taliban since many more people are trying to escape from the country to save their lives. In all ways, the Taliban sealed, and no one enters or goes outer of the country without consideration. In that, global trade is heavily affected by the country, facing several sorts of issues. Generally, in all possible ways, the Taliban influenced the nation. Now, the Afghans are risk challenging and getting several issues. Need to resolve all the issues in Trading, and then the global trading business is done properly.