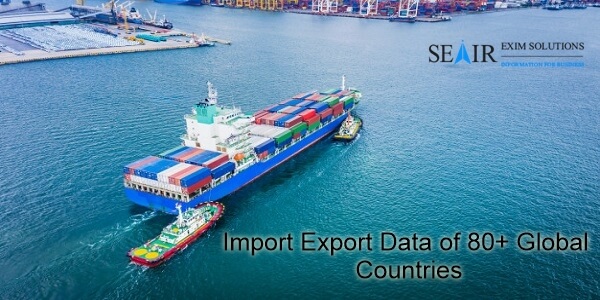 Import export data plays an important role in business success. Precise import-export data allows importers and exporters to view information about the products being sold or bought and make a sound business plan.

Import-export data contains details of the commodity such as product description, HS Code, unit quantity, total quantity, the applicable tariff, the destination and port of origin and details of the importer and exporter. This data is collected from custom ports from around the world. This database can be further be classified to show international traders information regarding:-

Importers and exporters can use the database to get detailed import-export data about any county. The database can let them know the top exports or imports of any country. The country's top trading partners. International traders can get in-depth information about the commodity they deal with, HS Code, custom duty, etc.

China import-export data reveals that the country imported 2.069 trillion dollars worth of goods from around the world. 55.4% of the imports were from Asian countries. The top 10 imports accounted for 77.3% of the total imports. Imported ores, slag, and ash imports showed the fastest growth at 20.4%.

Top imported products in China are:-

The rapid export growth has helped accelerate China’s growth. China exported 2.499 trillion dollars worth of goods around the globe. The data revealed that the EU and the US were the country’s biggest export destination accounted for 17% of China’s exports. The data also revealed that the toys and games sector was the fastest-growing sector at 10.7% in the top ten categories. While non-crocheted clothing dropped by 6.5%.

Top exported products from China are-

Mexico import-export data revealed it is the 9th largest export economy in the world valued at 450 billion dollars.

The top export products in Mexico are:-

The top trading partners in terms of exports are:-

Mexico was the 13th largest importer in the world valued at 464 billion dollars. Mexico's main imports are manufactured products accounting for 53% of the imports.

Top imports products in Mexico are:-

The top imports are:-

The import-export database can be sorted out year wise. This lets importers and exporters examine trends and formulate business plans. The data allows international traders to make a forecast on the market. The data is also used by governments in trade negations with countries, customs duties, and make other policy decisions.

Indonesia's February 2020 export data showed the total export was valued at 13.94 billion dollars. The data showed an 11% jump from the export figure in February 2019. The exports fell by 5.67% in November 2019. The data revealed that exports reached its peak in 2012 have been falling since due to falling in commodity prices and declining global demand.

Importers and exporters can use the database to plan their logistics for their import and export business. Ports are vital links to global trade. Commodities enter countries through roadways, seaports, railway or airways. Seaway remains the most cost-effective way to transport commodities in bulk.

Vietnam has a 3058 km long coastline. The country has 114 seaports with 14 large ports. The 3 largest ports in Vietnam are:-

Pakistan has a 1200 km long coastline. The country has around 8 major and minor ports. The important ports in Pakistan are:-

Mexico has 102 ports and 15 out-of-port terminals. The top 3 ports in ports in Mexico are:-

Cars, refined oil, and integrated circuits are the three most traded commodities in the world.

Finished automobiles are the top goods traded worldwide.1.35 trillion dollars each year. Auto parts were in the fourth spot with 685 billion dollars of imports and exports.

The largest importers of cars worldwide are:-

The largest exporters of cars worldwide are:-

Petroleum is the second most traded commodity in the world. 825 billion dollars were traded.

The largest importers of petroleum worldwide are:-

The largest exporters of petroleum worldwide are:-

The integrated circuit was the third most imported commodity was valued at 804 billion dollars.

The largest importers of integrated circuits worldwide are:-

The largest exporters of integrated circuits worldwide are:-

HS Code stands for harmonized code. The code was developed by the World Customs Organization (WCO). This is a common standardized code to describe the type of commodity. The HS Code is a 6-10 digit number that is required for all international shipping. The code is used by customs authorities around the world to identify the product being shipped across the border.  HS code is organized into 99 chapters and 21 sections. Custom authorities use the HS Code to apply the customs and duties applicable on the merchandise and to prevent illegal items from crossing their borders.

International traders must be very careful about applying the correct import-export code to prevent delays in clearing customs and pay the correct customs duty amount. HS codes have 6 common digits across 200 nations for a particular item. Some countries have 8 digit code or 10 digit codes for further classifications.

USA uses a 10 digit number called Schedule B. The first 6 digits are the prescribed HS code the last 4 digits for further classification. Exporters must use Schedule B when they file electronic export information in the Automated Export System (AES). E.g. 0901.11.0000 is Schedule B for non-decaffeinated coffee.

Sri Lanka uses an 8 digit HS code. The first 6 digits are in line with the international standards while the last two are for further classification. For example 0901.11.90 is the Sri Lanka code for coffee.

The importer-wise database can give you details of all of importers operating within the country. You can get details information about the importers including contact information and the product imported by them.

Some importers in Sri Lanka are:-

Some importers in Russia are:-

The import-export database can be sorted to show viewers details of exporters in a country. You can use the data to get detailed information about the exporters including contact information and the product exported by them.

Some exporters in China are:-