The Global trade facing toughening conditions as slowdown in exports 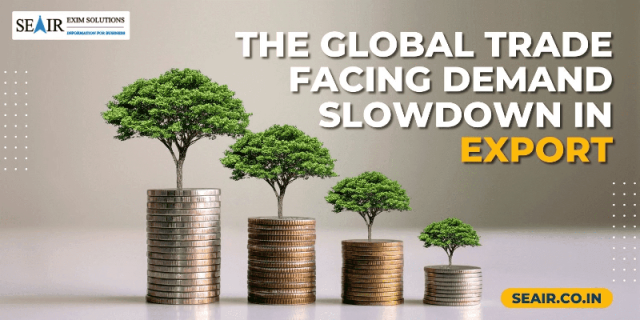 As we know India's exports decreased in this year again, with cotton yarn, apparel, and engineering suffering the most. In September, merchandise exports decreased 3.5% year over year due to weakening global demand, rising inflation, geopolitical unrest, and export limitations on some products.  Exports had previously declined in February 2021. The trade imbalance increased from $22.47 billion in the same month last year to $26.72 billion last month, according to data issued by the commerce ministry on Monday. The trade imbalance did, however, gradually close. In this blog, we will discuss how global trade is facing toughening conditions as a slowdown in exports.

Slowdown in Exports is reflection of toughening conditions: FIEO

New Delhi: By observing the trade data for the month of September, 2022, Dr Sakthivel, president FIEO stated that the decreasing in exports is a reflection of toughening conditions of the global trade facing demand on account of high inventories, increasing inflation, economic entering recession, high volatility in currencies and geopolitical concerns. The decline in the commodity prices and restriction on some exports will stem the price to gain the domestic market, have affected the growth numbers.

Also, he expressed that the decline in exports of engineering goods, apparels and textiles sectors is of particular concern as these are the major sectors to huge employment. At the current time, the increase in exports of electronic goods on a sustained basis is a fair sign besides growth in exports of gems & jewellery and petroleum products.

Further, Dr Sakthivel also added that in the current situation, the main focus should be on rendering liquidity at competitive price to the export sector and therefore RBI may consider commencing export credit refinance facility to financial institutions so as to encourage them to lend to the export sector with refinancing from RBI to the repo rate.

Since the interest rates have changed upward and are now more than pre-covid level, there is a strong case to restore the interest equalization support to 5 % and 3% respectively.

Also, the central government should take into the request of the export sector for continuing with IGST exemption on freight on exports, which lapsed on 30th September, 2022.

Indian exports saw unexpected growth in September, despite fears of a worsening outlook for international trade, according to new statistics from the Indian government.

According to Export Import data released by India’s commerce department at the end of last week, Indian exports grew 4.8% year-on-year in September.

"Since the signing of the India-UAE Comprehensive Economic Partnership Agreement, overall exports to the UAE have been increasing, and in July, exports of plain gold jewellery to Middle Eastern markets rose by 29%. We eagerly anticipate the free trade deal with the UK, and the India-Australia Economic Cooperation and Trade Agreement would also be beneficial to business. Due to seasonal demand and the approaching Christmas season, we anticipate growth in the future months, particularly from Western countries, Shah said.

The biggest slowdown in August was seen in engineering exports, which account for one-fourth of the value of all items exported from India; they fell 14.59% to $8.25 billion. Compared to $33.38 billion in August of previous year, outbound exports fell to a 13-month low of $33 billion in August. Exports decreased 9% sequentially from $36.27 billion in July to $192 billion overall between April and August, while they increased 17.1% year over year.

"Sri Lanka is experiencing an economic crisis, while Bangladesh is dealing with a gasoline shortage and Pakistan is dealing with significant flooding. India's own raw materials are still unaltered. According to Chairman of the Apparel Export Promotion Council (AEPC), Narendra Goenka, we will make up for the loss by the end of the year.

In August, India exported garments worth $1.32 billion, a 0.42 percent decrease year over year. Across the board (from April to August), outbound exports increased by almost 18%. In August compared to the same month last year, raw material exports, such as cotton yarns and fabrics, fell by over a third to $881.86 million.

Export-import data is essential for successful global trade. Since import and export information is crucial to the success of business endeavours, it is known as the "Golden Key '' to success in trade and commerce. Seair Exim Solutions provides accurate Import Export Data, HS Code, Global Trade Data, and Custom Data which includes shipping costs, insurance prices, costs, and components of all taxes that are pertinent to the various imported and exported commodities. The accompanying analytical studies provide a complete examination of the global trade market. If you're looking for precise information, you could look into Seair Exim Solutions to grow your business worldwide.