Traders and Importers of Palm Oil of India rises in 2021

Palm oil is a vegetable oil that is edible and is mostly used in cosmetics, food, toiletries, and also sometimes as cleaning products. It is derived from the palm fruit in West Africa. During the 19th century, it was later imported to Southeast Asia from Africa and has a vast production in Malaysia and Indonesia. Palm oil is considered the best of other vegetable oils due to the below reasons:

Palm oil can be extracted throughout the year, as it has a year-round harvesting period. It is the best choice for product manufacturers. Palm oil is the best ingredient as it maintains a solid-state with products at room temperature and it requires less maintenance.

The top list of the importers of Palm oil is the European Union, India, Pakistan, Bangladesh, and China. If these countries are examined separately, one of the top importing countries of Palm Oil is India, China, Pakistan, and Spain.

The world’s biggest importer of Palm oil is India. In 2017 India accounts for about USD 9748 million.

Palm oil is imported to different regions across the globe. This includes Southeast Asia and also Africa which is produced most commonly. Below are the 15 countries that represent the top Importers of Palm oil.

Most of the traders and importers of Palm oil countries are located in Asia and Europe.

How much Palm Oil is imported by India?

India has imported about 64.15 metric tonnes of CPO and RBD of 23.9 lakh MT in the year 2018-19. A bulk of palm oil during this time was from Indonesia. The Commerce Ministry of data showed that India has imported about $10 billion of vegetable oil in the year 2019-20. This has ranked the country fifth for its most valuable import after gold, mineral oil, coal, and telecom instruments.

Palm Oil is the cheapest edible oil that is naturally available. Since it has an inert taste that makes it suitable to be used in foods like baked goods or fried snacks. It stays stable even at high temperatures and therefore is suitable for reuse or deep frying.

Consumption of Palm Oil by Countries

It could be misleading to review the biggest importing countries of palm oil alone. As mentioned both India and the United States are the biggest importers of palm oil. There is a slight difference in how much palm oil is consumed or purchased in every country. According to the reports of the World’s Top Exports, about 20% of the palm oil of the world is imported by India, China ranks second in the import of Palm oil. The amount of palm oil imported by China is half of India’s report of the import rate. If you are examining oil imports, India consumes the most palm oil which is at 11,600,000 MT. Europe imports of about 6,50,000 MT. China is less than the EU which is at 5,250,000 MT.

The Report of Indian Import Market of Palm Oil in 2017

The Indonesian Association of Palm Oil, which is also known as Gapki, the shipment of palm oil to India raised to 32%. This recorded 7.6 million MT in 2017. Below are statistics of palm oil from January to December 2017. 2017 – India Recorded with the Highest Shipments of Crude Palm Oil

Different types of Palm oil are available in various forms of oil that are sold in the market are Crude Palm Oil, RBD Palmolein, Crude Palm Kernel Oil, and Crude Palmolein RBD which is refined, bleached, and deodorized palm oil. India imports this crude palm oil in huge quantities from Indonesia and Malaysia to fulfill its consumption. Crude palm oil of about 8857288 MTS is imported in India in 2017. This is then followed by the RBD palm oil with a quantity of 4274278 MTS.

Below is an overview of the performance of India’s import of palm oil with its shipment values of the palm oil registered in the year 2017. The Top Import Partners of Palm Oil of India

The Malaysian palm oil export had a fall in 2018. As India raised the import duties to the largest in a decade. The import tax on crude palm oil was raised by India to 30% directly from 15% and also increased the import tax duty on its refined palm oil which was imported to 40% from 25%. India mostly relies on its imports to meet 70% of its requirements of vegetable oil. Why did India increase the Import duty of Palm Oil? The only objective of India was to raise the cost of soybean and groundnut oil more than its minimum support price. The other objective was to move to the offset of the export duty which was imposed by the palm oil-exporting countries like Indonesia and Malaysia. The 3 largest import partners of Palm oil of India as recorded in 2017 are: 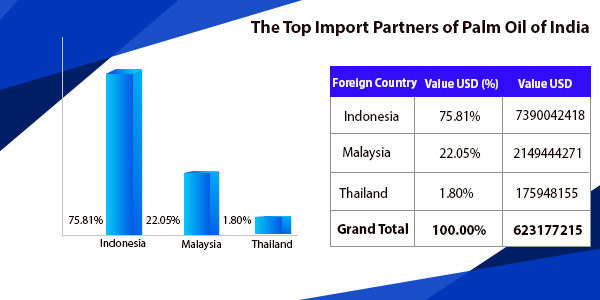 As per the Export Genius report of India on the palm oil industry, the Kandla Sea in 2017 was recorded as the highest shipment of palm oil. There was a total of 3234320 MTS of palm oil that arrived at this port. It shared about 26.31% of palm oil amongst the total ports of India. This was then followed by Krishnapatnam Sea Port and the Kolkata Sea Port with a share of 16.26% and 14.91% in value. Below are the 10 largest ports of India where the shipments of palm oil arrived in 20170 It was predicted that the Palm oil imports will pick up to 600,000 tonnes per month during March and April, thus stocks needed to be replenished. During the end of February, the stocks of crude palm oil declined to 265,000 tonnes.

An additional tax has been imposed on the imports of crude palm oil because the world’s biggest importer of edible vegetable oils is trying to build domestic agriculture infrastructure by taxing more on imports.

India has decided to cut the duty taxes on crude palm oil and refined, bleached, and deodorized palm oil and has moved the RBD oil from free to restricted imports list. In July 2019, palm oil imports construed a retaliation against the Malaysian as they had criticized India’s internal policy decisions like the revocation of the special status for Jammu and Kashmir and also the new citizenship act.

India has restricted the import of RBD oil from Malaysia has not banned. CPO is still imported without any charges. A special license is required for a restricted good to be imported.

India is the largest importer of Palm oil in the world, it has a duty to now push for ethical production practices.

India’s import market is very price-sensitive and is very less concerned with the ethics of the environment. Due to Covid-19, the global agricultural market has been badly affected. Palm Oil especially in India, is the largest importer of the commodity in the world. Due to the countywide lockdown in 2019, the demand for palm oil has been reduced. The pandemic shuttered the hotels and restaurants that are the major consumers of palm oil. The consumption of edible and vegetable oil in India, which is dominated by palm oil, is nearly crashed to 40% after the lockdown. In 2020 it was expected that the palm oil import will slump by 25% to the lowest.

Since 2001, palm oil is always considered a necessity in traditional cuisines, this has gone into accounting for 29% of edible oil consumption to 65%. The palm oil demand in India has a significant effect on the complete industry. As the import of Palm oil, India accounts for 20% of the entire world, it also has the biggest effect on the efforts for the production and the processing of commodities to make them sustainable, and also ensure that no further environmental damage takes place. The same is applicable for the other important markets like China and also the European Union. These countries account for 16% and 14% of the global trade. In the European Union, the increased consumer awareness and also government policies have brought a turn towards the sustainability of palm oil in recent years. If these efforts can be easily replicated in India, this will take a long way to preserve the rainforests in Southeast Asia.

What will be the Impact of Demand?

During the last three decades, it is stated that India has become the biggest purchaser of vegetable oils across the globe. The rising urban population of India has changed consumption patterns and domestic production. This has failed to keep the demand and has contributed to the increasing importation of the edible oils of the country. In the year 2015 – 16, the imports of palm oil of India raised by an average of 12% every year. India imports 96% of the palm oil that it consumes from Malaysia and Indonesia who are the top producers of Palm Oil. As palm oil is best suitable for cooking, India’s preference for palm oil has become cheaper as compared with any other vegetable oil and the production proximity. This means fewer shipping times.

The expansion of the cultivation of palm oil has lead to deforestation at unprecedented rates. A large-scale expansion of palm oil in 1990 – 2010 has contributed to a forest cover loss in Malaysia and Indonesia. Smoke hazes blankets in many parts of Southeast Asia every year. This is generated by the burning of forests to clear the lands for further plantations. It is stated that in 2019 about 50 million people were affected by the smoke which was caused to the clearing of the forests for the plantations of palm oil.  This will not only affect the local people and the ecology but will also affect the global climate due to an extended-release of carbon dioxide.

It is now clear that due to the rising demand of the plantations of palm oil, domestic production will remain under 10%. This means, that India will further continue to import palm oil in other forms. Domestic palm processors like the millers and refiners routinely demand restrictions on imports to protect their margins.

The consumption pattern of palm oil in India mostly depends on the category of its users that includes mass-market commercial establishment that prefers palm oil to be more expensive. India has a huge market for blended oils that includes a combination of palm oil and vegetable oil. The premium in the domestic market to purchase a certified sustainable oil is about $30 per tonne of crude oil.

The Indian chapter of the Roundtable on the Sustainable Palm Oil that has set a benchmark for certified sustainable palm oil has realized the importance of the Indian market to have a way to sustainability. This has helped them to become more active in the country and collaborate with the Centre for Responsible Business and WWF India.