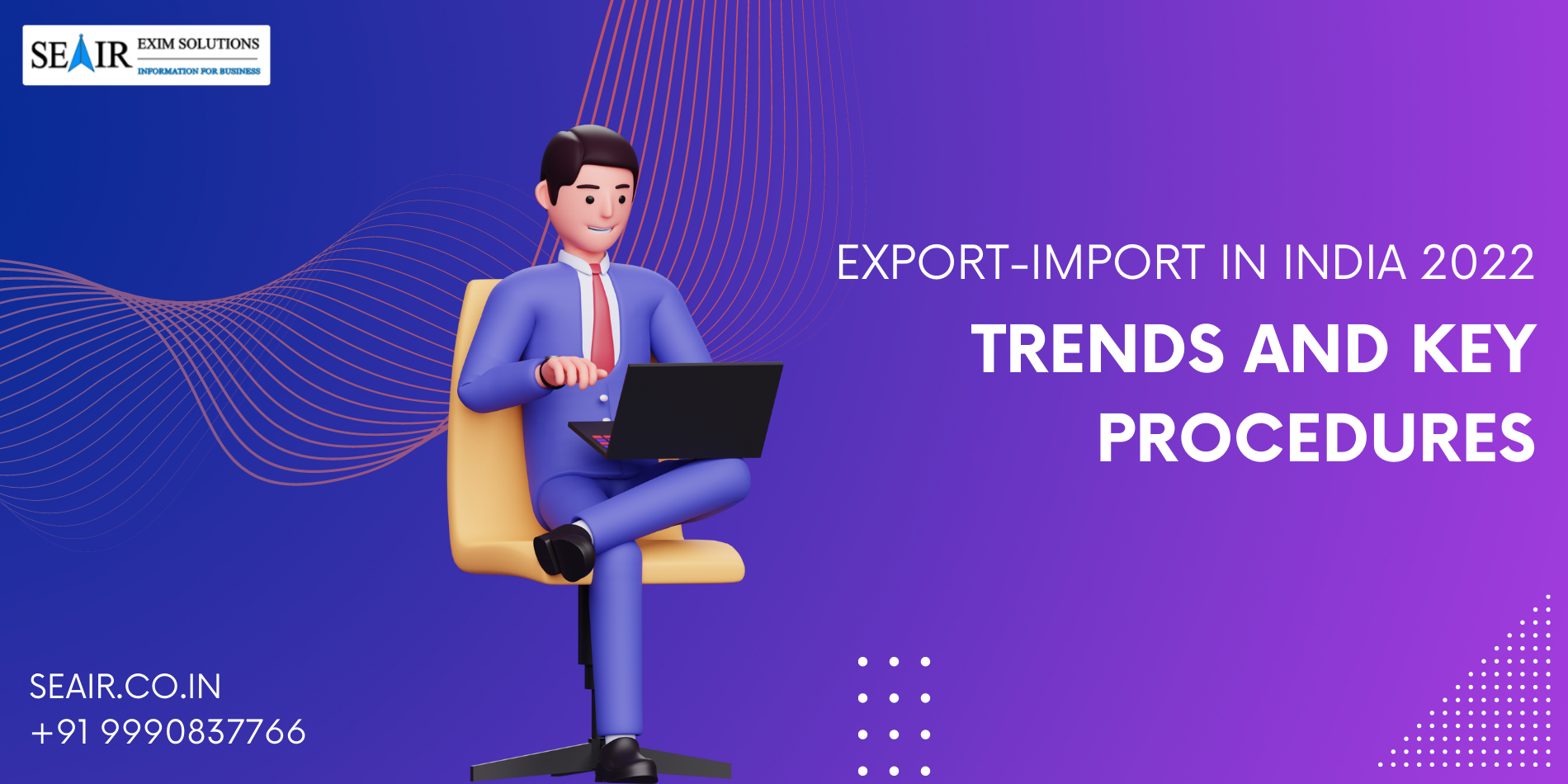 As we Know, India’s trade data have amplified exponentially in recent years, with the financial year 2021-22 (FY 2022) recording the biggest ever value of merchandise exports. According to government Import Export Data, India's merchandise exports hit a record high of US$417.81 billion for the fiscal year (FY) 2021–22, up 43.18 percent from the US$291.18 billion in the prior fiscal year and up 33.33 percent from US$313.36 billion in FY 2019–20. This estimate for 2021–2022 is greater than projected and does not include export data from ports that do not support EDI (electronic Data Interchange).
The article discusses India's present trade patterns as well as long-term forecasts that place the country's exports at a US$1 trillion valuation by 2030. We provide a thorough explanation of Indian export-import procedures as well as the process of establishing a trading company while reviewing new trade agreements and chances to increase commerce.

Exports and imports have expanded in recent years as a result of India's vigorous policy drive and extensive infrastructure improvement. According to the Import Export Data the United States (US), which surpassed China in the previous fiscal year to become India's largest trading partner, is one of India's top trading partners. On the strength of rising oil trade, UAE has also become one of India's top trading partners. India's exports of goods hit a record high in FY 2022, totalling US$417.81 billion, up 43.18 percent from US$291.18 billion in FY 2021. India's product imports surged to US$610.22 billion during the same time, up 54.71% from the US$394.44 billion recorded during FY 2021.

The import and export process normally entails several steps, including reviewing the import-export papers, paying taxes, checking the licence, and inspecting the products to be imported or exported Before we go into the specifics, let's take a closer look at the process:
Indian Import Procedure:
The briefing, Import procedure includes the following-
Obtaining the import/export code
A regional joint DGFT Import Export Code (IEC) number must be obtained before importing into India. The IEC is required for customs clearance, accepting and paying in foreign currency, and sending or receiving cargo. It is also valid for life. Ten to fifteen days are needed for IEC registration.
Verify that the goods comply
Only items covered by Section 11 of the Customs Act of 1962, the Foreign Trade (Development & Regulation) Act of 1992, and the Foreign Trade Policy, 2015–20 are eligible for importation. If the item you are importing falls inside this list, great; but, if it is restricted, you will need special clearance from the DGFT.
Obtaining import permits
The importer is required to categorise the imported goods using the ITC (HS) classification, which is based on the HS Code or Harmonized System of Coding.
There will be specific rules pertaining to each sort of item.
An import licence can be general, allowing items from any country to be imported, or particular, permitting just goods from certain nations. Depending on the type of imported goods, the validity of this licence, which is required to obtain import clearance, ranges from 18 to 24 months.
Bill of Entry for Import Declaration should be filed
After receiving the licence, you must fill out the Bill of Entry to declare the import procedure in order for the authorities to move forward with the process without any problems.
Duty Rate on Imports
The last step is to pay the customs or import duty rate required by the Indian government for the import to be cleared successfully.

Documents for export and import

The Foreign Trade Policy requires that, in order to conduct business, both importers and exporters produce specific commercial documents:
Depending on the situation, additional documents like a certificate of origin and an inspection certificate may be needed.
The key regulatory documents are as follows:
The Foreign Trade Policy 2015–20 provides benefits and concessions that the RCMC assists exporters and importers in obtaining.

India has finally reached its lofty goal of exporting goods worth more than $400 billion US dollars. Pent-up demand from the COVID-19 pandemic's major waves, as well as the expansionary monetary policy implemented by industrialised nations to deal with the pandemic's effects, are what are causing the export boom. India's imports of goods have increased more than its export goal, leading to a significant trade deficit of 87.5 percent. The dramatic increase in imports of crude oil, coal, gold, electronics, and chemicals as the economy reopened and business and consumption activities steadied are significant causes causing this rising import bill. Rising commodity prices, such as those for coal and crude oil, have significantly increased the value of India's imports.

A nation's economy depends heavily on importing and exporting commodities and services; without foreign trade, an economy cannot develop on its own. Seair Exim Solutions is a foremost provider of export import data. It furnishes up-to-date, trustworthy, and accurate Global Import-Export Trade Data and HS Code for several countries, including Kenya, Mexico, Pakistan, Kenya, the United States, and Russia. We can be your most reliable service provider if you're looking for reliable Import Export Trade data.
Our highly experienced professionals have more than decades of expertise in data mining and data processing. We are skilled in delivering the most accurate systematic global export-import data that allow you to expand on ongoing trade inflow and suitable market positions across India and around the world.